William Lewis of Florida broke the record for the most expensive Starbucks coffee ever ordered, clocking in at $83.75, giving a new meaning to the grande latte.

The Starbucks barista had plenty of room to spell out Lewis’ name on a giant-size coffee cup, a 160-ounce latte that included 99 extra shots of espresso and 17 additional pumps of vanilla syrup. 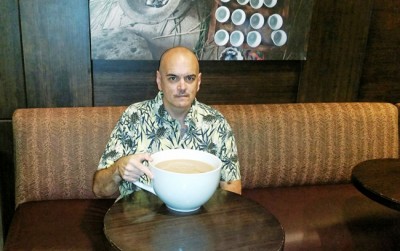 The record breaking beverage contained a jolting 7,500 milligrams of caffeine.

Starbucks spokesperson Linda Mills said the policy for the chain, the majority of whose U.S. stores are company-owned, is that its hot beverages can’t be served larger than a 20-ounce Venti size. h/t mtv