“SNOWDEN MOVIE INDICTS OBAMA” Citizen Four, the new shocking documentary about Edward Snowden, by Glenn Greenwald and Laura Poitras, screened tonight. The two hour film will be released by the Weinstein Company to the general public later this month.

Pulling no punches, the film paints the Obama administration in a bad good light as Snowden explains how the government has violated privacy rights on a massive scale. 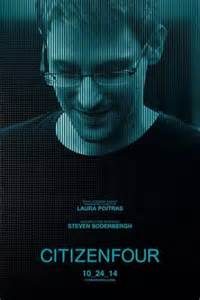 Then there’s the Hollywoodization of Snowden. The detail of how and why Snowden went about this is pretty surprising considering how the 29 year old former NSA employee says he wants his own privacy and not to be a celebrity. It’s instructive to see his evolution from eyeglass wearing nerd to contact lenses and moussed up hair sporting hero of his own thriller. It’s all very Tom Cruise. Even the beautiful girlfriend sets up housekeeping with him in Moscow. Nevertheless as the details of the NSA’s programs are revealed Snowden says, “This isn’t science fiction. It’s really happening.”.
h/t showbiz411

Also the filmmakers clearly indicate that all roads lead to POTUS, a fairly serious accusation. There may be serious repercussions.