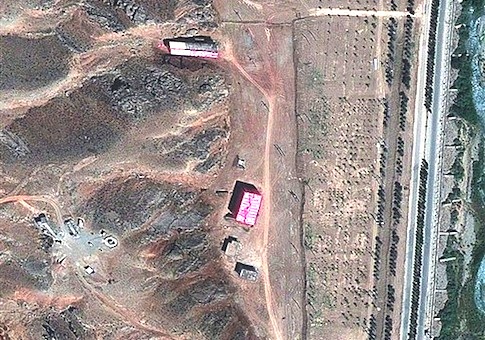 In this satellite image supplied Friday Aug. 24, 2012, by the Institute for Science and International Security (ISIS), showing what they say are buildings, seen here at centre and top, shrouded with a pink tarp to stop the U.N nuclear agency from monitoring Tehran’s efforts to sanitize the site which they suspect was used for secret work on atomic weapons, in this photo dated Aug. 15, 2012, of the Parchin military complex southeast of Tehran, Iran. Other photos taken at an earlier date, appear to show the same buildings, without a tarp but with what looks like the results of extensive alterations undertaken at the suspected high explosives testing site, including the demolition of two nearby buildings and major earth displacement activities nearby, diplomats told The Associated Press on Friday Aug. 24, 2012. The information on the shrouding of the building came from two diplomats who demanded anonymity because they were not authorized to discuss the confidential satellite images. (AP Photo/ISIS)