A white van took police on a wild ride through the streets of Los Angeles. At one point the suspect, driving on three blown tires, thanks to spike strips, hit a defenceless dog, live on the local CBS news.

After the suspect hit a small a white dog who was crossing the street, his vehicle finally gave out, this was after one final pit maneuver. 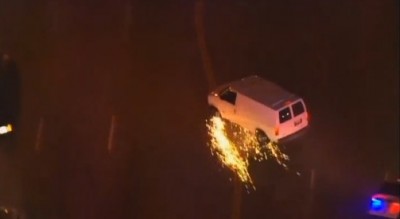 We monitor live feeds to bring you the latest breaking news, and we can tell you that we could hear the reporter calling the action in the helicopter, weeping for several minutes after witnessing the dog getting struck.