Philadelphia cops are offering a $110,000 reward to anyone who can help them find two carjackers who struck and killed three kids, seriously injuring three adults.

The scumbags were traveling at a high rate of speed when they crashed into a fruit stand where the kids and their parents were conducting a church fundraiser. The cowards then fled on foot. 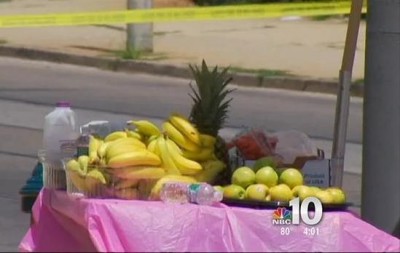 Siblings Thomas Reed, 10, Keiearra Williams, 15, and Terrence Williams, 7, were selling fruit outside their church Friday when they were hit and killed by a white Toyota 4Runner SUV that blew a tire while making a turn at a high speed. The children’s mother was also hit in the crash and taken to a hospital in critical condition. Another woman who was hit by the SUV was also injured, and the SUV’s owner, who was in the vehicle when it crashed, was also injured. “Taking innocent people’s lives.

That’s my son, you took him away from me. Turn yourself in, dog. Whoever y’all is, turn yourself in,” the father of Thomas Reed told ABC affiliate WPVI. source