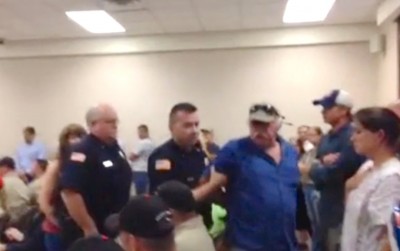 The arrested occurred during a discussion of an unpopular decision to submit a second application to TDOT (the first was denied) that would allow a private company, US Nitrogen, to install and run wastewater pipes to the Nolichucky River so they would be able to get free water and a free place to dump wastewater instead of signing an agreement with the local water utility which would help the community.

Mayor Alan Broyles and the board are already facing a lawsuit from citizens for violating the Open Meetings Law. No microphones were used, though clearly available in the room and at least 4 members of the board were sitting with backs to the public viewing area. source

When Mr. Overholt asked them to please speak up the Mayor ordered his removal and subsequent arrest. He was forced to walk to the jail despite having health problems and was also charged for resisting arrest when he needed to rest.

Citizens are outraged and calling for justice for this veteran.