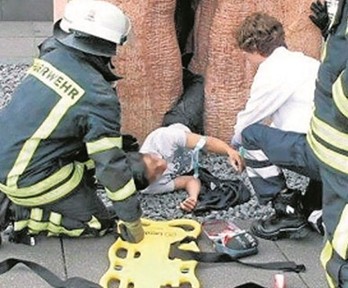 A US exchange student was rescued from the jaws of a giant stone statue, located in a southwestern university town in Germany.

The Tübingen firefighters received the emergency call of ‘A person is trapped in stone!’ Twenty-two firefighters and a grand total of five vehicles had to rush to his aid to pull him out of the 120,000-euro sculpture.. 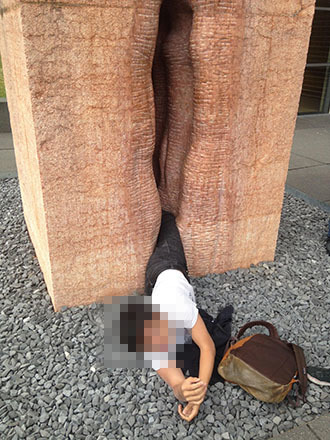 The student had apparently climbed in for a dare, according to local reports. One, likely very unreliable local newspaper declared that:“the young man felt the sculpture of the female vagina to be so attractive that he literally disappeared into it” However, others suggested it was merely a photo opportunity. “I was there!!! He just wanted to take a funny picture“ imgur user Erick Guzman wrote. “The fire department was not really amused, and he was really embarrassed,” he added. source


‘Pi-Chacán’ or ‘Chacán-Pi’ was designed by internationally acclaimed Germany-based Peruvian artist Fernando de la Jara and was erected at the university some 13 years ago. The statue is located in Tübingen, southwest Germany, at Tübingen University’s Institute for Microbiology.
POST NOWTWEET NOW