Cop On PAID LEAVE After Holding Loaded Gun To Head Of Child, 5

This cop, Naaman Adcock, resigned from the police department, after being arrested and placed on PAID administrative leave over firing a gun inside his home and then holding said gun to a five-year-old child’s head. 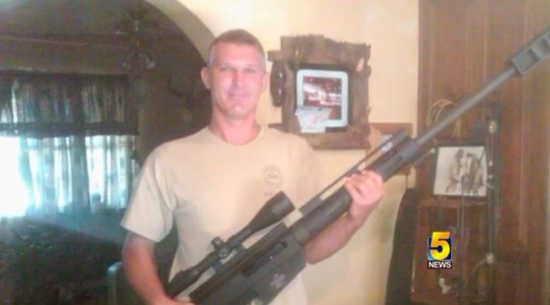 Do you guys think this guy should have been fired right away? Comment below!

Officer Naaman Adcock was placed on administrative leave with pay while authorities conduct an internal investigation. Sequoyah County authorities said they took nine guns from Adcock’s possession after he fired off several rounds into a wall inside his home after he got into a drunken dispute with his wife.

Incredible this guy wasn’t fired on the spot. Not only did he terrorize the children at gunpoint, he pulled a gun on a deputy:

Deputies continued to Adcock’s residence, and when they knocked on the door, Naaman Adcock answered with a gun drawn and pointed it at a deputy. The deputy drew a gun and pointed it at Adcock, ordering him to drop his weapon, the report states. source

The report states Adcock asked, “What? Oh really, are you going to shoot me?”

He later gave his gun to the deputies and spoke with them on the porch.

He’s lucky to be alive. And what about those seized guns?

Tabatha Adcock and her children eventually were taken by her step-father, and under Sheriff Ron Lockhart’s orders, Naaman Adcock’s guns were seized until he sobered up.