A Goat Had Sex With A Sheep, And This Came Out

An Irish farmer says he is “shocked” after one of his sheep gave birth to goat-sheep, or now we can simply use the “geep” amalgamation. 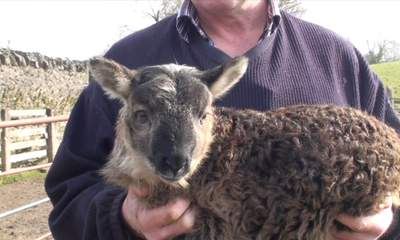 Pat Murphy, from County Kildare, said the animal, which has not been given a name, was born to a ewe last week.

“It had all the hallmarks of a goat. I knew a goat had gotten in among a few of the hoggets (young sheep), I didn’t know what would turn out,” he told the Irish Farmers Journal. source

Mr Murphy said the brown, male “geep” has two horns growing on his head and is very quick on his feet.

The ewe that gave birth to him appears to have taken to him as if he was a normal lamb.

Mr Murphy said is undecided about whether the geep will be sent for slaughter: “We’ll try and keep it as long as we can.”

He said he had no plans to encourage breeding of any more.

Mr Murphy said it was a true “one off” and that his father and grandfather who were farmers before him had never seen anything like it as far as he knew.

There have been previous reports of sheep-goat hybrids in countries such as New Zealand and France.

Other animal hybrids include “ligers” which are when a lion and tiger breed and a “zebroid” which is half zebra and half horse.