A hammerhead shark dragged a college student in his kayak up the Atlantic coast for a two-hour “South Florida sleigh ride” that the kayaker taped with a head-mounted camera and posted on YouTube. 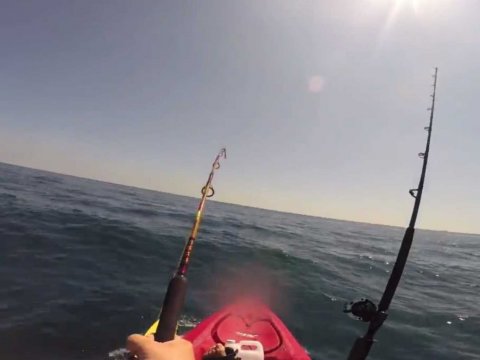 Adam Fisk, 22, posted a five-minute clip of his adventure titled “Lone Man Gets Towed for Miles in Kayak by 11 Foot Hammerhead Shark.”

“I threw my bait out and went to reel my other one in so I wouldnt get tangled, and I just had time to pick up the rod before the other one already got picked up by that hammer,” Fisk wrote on the YouTube site. source

At one point, Fisk dunked the camera into the water and recorded the shark swimming ahead of the kayak.

A student at Florida Atlantic University, Fisk set out in a kayak on Sunday with several poles to go fishing before the shark took his bait near Boynton Beach, Florida.