Phillip Phillips went big in his return to “American Idol” on Thursday bringing along a big song and extra accompaniment. 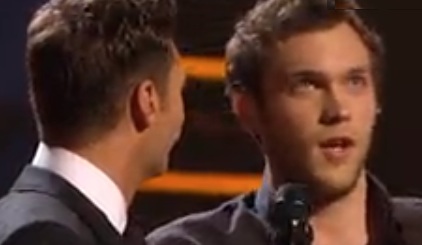 The season 11 winner joined the results show to perform his new single, “Raging Fire,” live for the first time, but his pitch was not the greatest. At one point he sounded like he was singing with some kind of strange irish accent. He seemed extra awkward during his chat with Ryan Seacrest after the performance. Honestly, he seemed a little altered.

This kid is best with just with his guitar or a small band. Why go for the epic U2 song now? Even Filter waited on that one..

The song is the first to be released from Phillips’ upcoming second album.