Is Aaron Rodgers gay? According to a new report the answer is “yes,” with a big hand wave and possibly a touchdown of some sort! 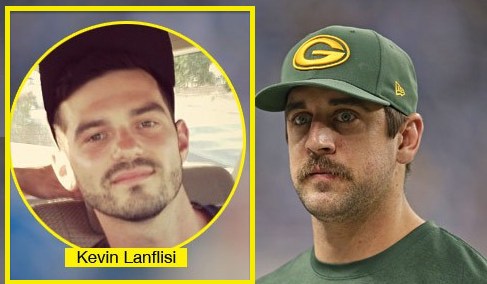 Aaron Rodgers was in a serious relationship with his ex-roommate and current assistant Kevin Lanflisi, according to HollywoodLife.com, the two had a “falling out” after they had agreed to join a group of NFL players preparing to come out over the summer. Then, Aaron backed out.

The report also points out, Kevin has posted numerous pictures of he and Aaron — which have now been removed. The two allegedly lived in Aaron’s Wisconsin home before the fight. Then Kevin moved to California.

In the photos, we see the roommates posing together at events, at parties and on a golf course. Kevin also posted a pic of himself wearing Aaron’s 2011 Super Bowl ring!

In 2012, Aaron spoke about his personal assistant in an interview with Milwaukee magazine:

I kind of judge how those people are based on how they are to people like Kevin. Kevin, he’s not a famous person. I want to see if they give Kevin the time of day, or if they bigtime him.

The report also brings up an interview from 2008 that Aaron did with Sporting News:

I’ve got a roommate, a guy I met in town. He works for the Packers now as an athletic trainer, but he was interning when I met him and we just hit it off. He’s been great for me as far as great conversations outside of football. Our friendship goes a lot deeper than what we do.