Another rapper arrested! This time it’s Kat Dahlia on the receiving end of an arrest warrant which landed her in jail and currently held on $2,000 bail! 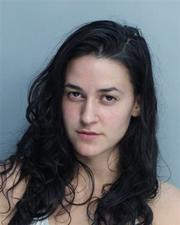 MIAMI BEACH, Fla. (AP) — Rapper Kat Dahlia has been arrested on charges of DUI and resisting arrest without violence.

Dahlia, whose real name is Katriana Huguet, was arrested early Tuesday in Miami Beach. Jail records show she’s being held on $2,000 bail. It’s not immediately known if she has an attorney. Huguet turned 23 the day before her arrest.

The arrest affidavit reports that an officer spotted Huguet speeding with the headlights off and pulled her over. The officer noticed a strong smell of alcohol in the car and noted that Huguet had blood shot eyes and her speech was slurred. She refused to perform any sobriety tests and cursed at the officer.

Kat is known for mixing rhythms like hip hop, R&B and soul, but now it looks like the rapper might be mixing something else a lot more toxic.