MTO is reporting that Nelly is about to be a new dad! The future mom is actress Tae Heckerd, the woman the rapper was creeping with while he was still dating Ashanti! I think I see a baby bump! Either that or Heckerd has gained a LOT of weight since Feb. 2013! 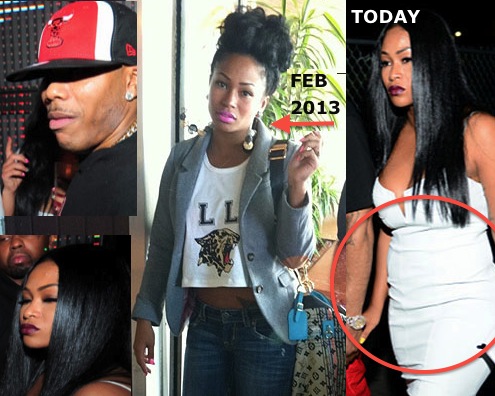 Last year Nelly HAD BEE SEEING Tae while he was still with Ashanti. Nelly eventually BROKE THINGS OFF with Ashanti – and LEGITIMIZED his relationship with Tae.

Now Nelly and Tae have taken things to the NEXT LEVEL. The two were spotted out yesterday, and Tae appeared to have a CLEAR BABY BUMP on her.

That’s gotta hut Ashanti – you gave this man a DECADE OF YOUR LIFE . . . and he knocks up the SIDE CHICK. Ashanti’s gonna have some real SOULFUL SONGS on her next album.