There is no love between Maria Sharapova and Serena Williams, and on Saturday Sharapova ripped her opponent calling her out on her home wreaking ways. 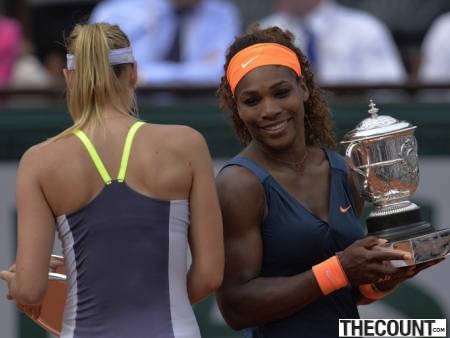 “If see wants to talk about something personal, maybe she should talk about her relationship and her boyfriend that was married and is getting a divorce and has kids,” said Sharapova. OUCH!

I find it astonishing that Sharapova would attack the world’s number one with such venom! There must be some serious bad blood between these tennis sisters. And all this ruckus just two days before Wimbledon gets underway! I’ll be watching for sure!

Williams was forced to apologise for her comments regarding the assault of a 16-year-old girl by two high school American football players in the Ohio town of Steubenville – and Sharapova was all over that too..

“I was definitely sad to hear what she had to say about the whole case,” said Sharapova, who was defeated by Williams in the French Open final earlier this month.

This may be the first Wimbledon ever with instead of a women’s final we end up having an all-out knock-out brawl.