Burlesque performer killed. An accident involving a party bus and multiple other vehicles on California’s Highway 101 has taken the life of a talented and well-known burlesque performer, Sarah “Sparkly Devil” Klein. 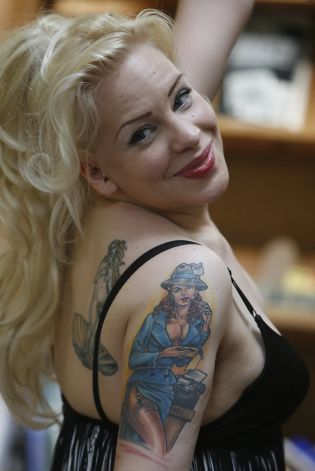 Kline, 36, was traveling in a car driven by her husband when it spun out of control striking the bus.

Eight other people were also injured as the chain-reaction crash, believed started by Klein’s husband, who was driving.

One of the two people in the car was pronounced dead at the scene of the accident. Authorities have not released the name of the 36-year-old woman, but the executive producer of the Bay Area’s Hubba Hubba Revue burlesque troupe identified her as Sarah Klein, known on stage as Sparkly Devil. While fighting back tears, Hubba Hubba Revue Executive Producer Jim Sweeney also said about Sarah Klein that “she was probably one of the greatest comedic burlesque performers I’ve ever seen, but she could also transition into classic burlesque (and) become this other glamorous person just by doing it. She was by far one of the most respected and beloved people in our community.” Source.

Klein was an internationally known burlesque dancer performer, as well as a journalist who wrote about the entertainment art form for magazines and alternative weekly newspapers.