Our good man Justin Bieber going absolutely nutzo on a pap! I think it’s safe to say that someone is feeling better! Dude you need to chill the F out seriously! To whom the gods destroy they first make angry! 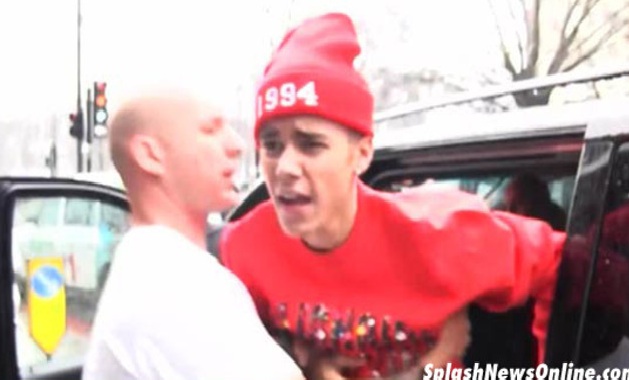 But Bieber clearly heard the photog’s insults (“f**k off back to America”, “f**king little moron”) … ’cause the singer opened his SUV door and sprung out of the car … trying to attack the photog. While Bieber’s bodyguard held him back, the singer screamed … “What the f**k you say?” The photog shot back — “You heard what I said … you heard what I f**king said, mate.” Bieber replied, “I’ll f**king beat the f**k out of you.” Justin tried to swing at the photog, but his bouncers kept the singer at bay … and eventually pushed him back inside the SUV. The car left the scene without further incident. Bieber just tweeted about the incident … saying, “Ahhhhh! Rough morning. Trying to feel better for this show tonight but let the paps get the best of me.” TMZ