Aerosol Sunscreen Catches Man On Fire Like a Trail of Gasoline! 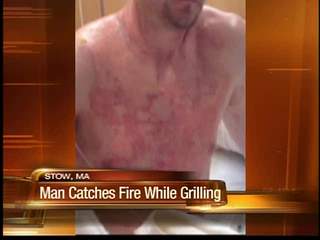 On every aerosol sunscreen bottle, there is a warning that says that the aluminum bottle full of sunscreen IS flammable, but doesn’t that just mean that the bottle only, is flammable? Apparently not!

Brett Sigworth, who was grilling out at his home in Stow, MA over the weekend, used Banana Boat aerosol sunscreen to protect himself from sun’s rays, just before mastering his grill.

Sigworth rubbed in the sunscreen on his body, then lit up his grill. Next thing you know, Sigworth went up in flames!

Sigworth, who got second degree burns, retold the story in a statement saying, “(I) sprayed on the spray-on sunscreen, and then rubbed it on for a few seconds. Then, I walked over to my grill and took one of the holders to move some of the charcoal briquettes around and all of a sudden it just when up my arm. All of a sudden it just lit up on fire everywhere. I went into complete panic mode, just screamed. I mean, I never experienced anything like that in my life.”

Sigworth explains that he burned the most on areas of his body where the sunscreen was heaviest. He said, “Just the way it burned, it went wherever the sunblock went. That’s where it burned.”

You wouldn’t think you could go up in flames a couple minutes after spraying on the sunscreen! But apparently this stuff catches fire like hairspray or a trail of gasoline!

Now that Sigworth is gaining national attention, Banana Boat has released a statement saying, “At Banana Boat, we take these matters very seriously and will begin a prompt investigation as we continue to strive to deliver products of the highest quality to our consumers.”