A plastic surgeon named Dr. Victor Ramirez, who’s practice resides somewhere in Mexicali, decided to illegally use a photo on his billboard of Kim Kardashian in her bikini, representing his practice. 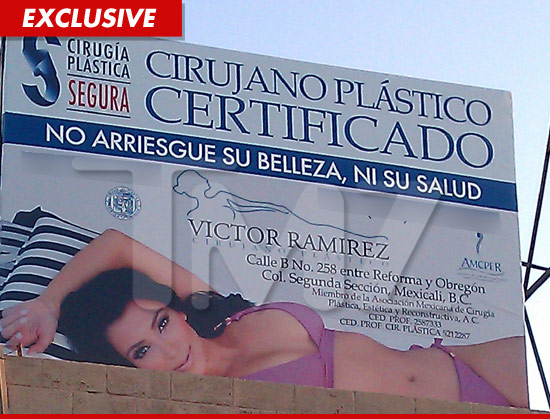 Although Kardashian herself says that she hasn’t ever had plastic surgery, she has had Botox, and showed the world on her reality show that it didn’t work out so well. So why is he using her photo?

Ramirez wanted to get sales, and didn’t think about the legalities of using a photo without permission.

Ramirez made a statement saying ‘he wasn’t saying that Kardashian had plastic surgery’ on the billboard, he was using her photo because ‘a lot of women want to resemble a flawless look like Kim’s’. The message on billboard translates to English saying, ‘Don’t risk your beauty or your health’ – which was trying to encourage people to visit a certified plastic surgeon instead of one with no license.

Reports say that Kardashian is looking to get the billboard taken down, and of course maybe sue this guy for false advertisement and not having permission to use the photo.