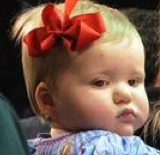 Indianapolis, United States, – February 05, 2012. Eleven-month-old Ava Frances Manning is held by her mom Abby as she touches the football held by her dad New York Giants quarterback Eli Manning after the Giants defeated the the New England Patriots 21-17 to win Super Bowl XLVI at Lucas Oil Stadium for NFL in Indianapolis, Indiana on February 5, 2012. Eli Manning was named MVP.