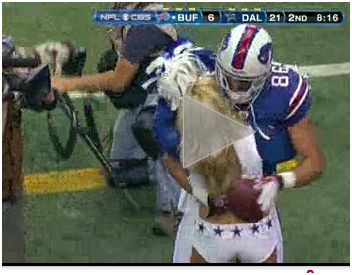 One of Buffalo’s Wide Receivers David Nelson, is dating a Cowboys Cheerleader, who he handed the ball to after his touchdown on the Cowboys home turf.

It’s legally A-OK that a NFL cheerleader is dating a NFL player, as long as they don’t play for the same team- if they were on the same team it would be considered “fraternization”. Today’s stunt at the Cowboys vs. Bills game wasn’t about fraternization, it was about the mere stupidity of Nelson, of not only putting his girlfriend in an awkward position by handing the ball to her after a touchdown for Buffalo, but also by putting her Cheerleading position in jeopardy.

Cheerleaders represent their team to the fullest in every way. In Cheerleading, these sort of matters like what happened today, are taken very seriously by the league, and unfortunately, Cheerleaders get replaced over a player getting replaced, even if a situation like this is not the Cheerleader’s fault.

Without the politics involved, I can see how one human being is happy for their own accomplishment, and how that happy person wants to share that special moment with their loved one. You can’t do this at a nationally televised NFL game! HELLO dude! You just may have gotten your sexy Cowboys Cheerleader fired!