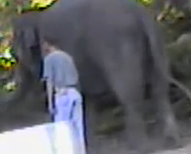 This video claims to have been shot shortly before filming began for “Water for Elephants” which starred Robert Pattenson and Reese Witherspoon.

In the video we see a bunch of regal elephants being shocked or bull hooked in a sick effort to make the beasts stand on their heads or trumpet foolishly.

Let’s face it, people like this, people who use and abuse animals like this, they should be shot.