Nivea “Look Like You Give a Damn” Party Vegas was Fun!

The other night, I actually logged off of the computer and attended a real party in Vegas! Yes, it’s true! 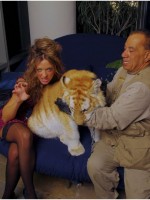 I got an invite to the official “Nivea: Look Like You Give a Damn” party at the The Palms Hotel and Casino Vegas. It was amazing to say the least. Actors James Franco, Emile Hirsch and Ben Foster were in attendance at the party before this one, but the star of this party was the Bengal Tiger!

When I arrived at the door of the party, the sexy Nivea models greeted me, and pointed me to the start of a fun obstacle course, which was all set up in a posh “fantasy suite” at The Palms. When I first walked into this fantasy suite on level 32, I noticed the amazing skyline view out the window which was to die for- it was just like the view on The Palms commercial. I was so excited to begin this little obstacle course and tour the huge suite.

When we began the course, a sweet Nivea model informed us to go through 4 different rooms, which were each filled with awesome Nivea products, desserts, a DJ in one room, and a barber who was giving out free presidential shaves was in another room. Oh, did I mention there was an open bar? Oh, and did I also mention that there was a sushi being hand-made and that there was prime rib on tap. Yeah…

After going through the exciting rooms filled with surprises, we finally made it to the “Tame the Wild Beast” course which meant ‘you made it through so take your picture with the Bengal Tiger’!

I went outside on the balcony to take a photo with the Tiger and boy that was exciting! I first mistook the Tiger for being really hungry because he was really gripping the Tamer’s arm with his big mouth, but according to Janine who was assisting the Tamer, she reassured me saying, “No he’s not hungry, he just likes to play.” So then I jumped in for a photo and then jumped right out! Hey, I can stand snakes on me, but spiders and kings of the jungle…it’s a little bit different! He was such a cute cat!

The party was beautiful inside and out. I was really impressed! I was happy to leave with some Nivea products too. I love free products- who doesn’t? I really like the ‘Milk & Honey’ lip balm which is unisex, and I think I’m going to try the ‘dark circle eraser’ roll-on ‘Q10′ gel too, even though it’s ‘for men’ it could pass as unisex. The other products were ‘Nivea for Men’ only (the scent is masculine).

Thanks to Monique and Jenna for the invite! I had a great time.

All pics from the Vegas Nivea: Look Like You Give a Damn party.