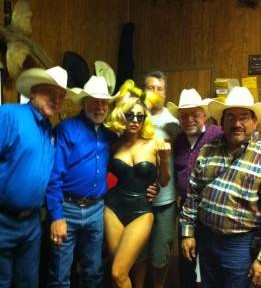 Lady Gaga performed at the American Airlines Center in Dallas, TX last night. After her show, she then made a surprise visit to the bar, rolling up at 11:30 pm in a limo.

The owner Alan Pierce said she stayed for about an hour, and that “She was a genuinely nice person, really nice to talk to, and very gracious with everyone she came into contact with.”

This wasn’t the first time Lady Gaga visited this bar, she actually performed there in 2008 before she became worldly famous…

“Back in 2008, I got a phone call from an agent on a Saturday,” Pierce said. “He said he had an artist in town who was on her way to becoming the next Madonna, and she wanted to perform in a gay bar and some other clubs that very evening. Of course, no one had really heard of her at this point. But we decided to take a chance on her. She came in and did two of her songs, and put on a great show. I think her appearance here Friday night is her way of showing her gratitude.” (See video of Gaga in 08′ here)

Here is the full account of Lady Gaga’s visit to the bar:
Ms. Gaga showed up wearing a skintight one-piece body suit, blond wig, and sunglasses. Upon arrival, she and her group were quickly ushered to an elevated area known as the Loft, which was closed off to accommodate them. “Getting her in and out was slightly difficult,” Pierce said. “We had to make room in the crowd to get them through, but there were no real problems.”

Pierce said Lady Gaga and her group seemed to be having a wonderful time. Although the pop diva did not perform, she did pick up the microphone to address her fans.

“She wanted to make sure everyone knew that she was not paid to come to the Round-Up,” says Roger Huffman, general manager of The Round-Up Saloon. “She talked about how she loves to come here and said this was her favorite place to stop. The last thing she said was “Let’s get trashed!” But mainly she just thanked the fans for their support.”

The offices at The Round-Up were turned into the Lady’s dressing rooms at one point, said Pierce, and the Round-Up staff got to meet the superstar one on one and have more fun. At one point, the owners of The Round-Up awarded the singer with a special belt buckle, designed to commemorate the country and western bar’s 30th anniversary earlier this year. “She seemed very excited about it and promised to wear it,” Pierce said.

So what does Ms. Gaga drink when she’s out having a good time? “It’s funny because the last time she was here all she drank was bottled water, so this time we kept sending her water and soft drinks and things like that,” Pierce quipped. “But this time she was like “Hell no! I want a Jameson’s (Irish Whiskey) and water!”