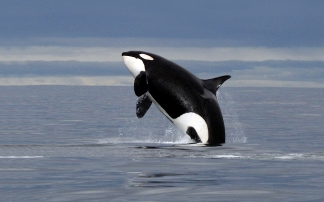 Peta.org is shedding light on the recent death of one of SeaWorld’s killer whale trainers. This is a big wake-up call reminding us that holding wild animals captive is not okay. We need to band together and make a statement that we will not stand for this. Peta.org released this important announcement in regards to the death of the SeaWorld trainer, and the fate of holding killer whales captive:

“In aquariums, dolphins and other sea animals routinely die prematurely of stress and other captivity-related causes, and SeaWorld has an abysmal record. But it’s not just animals who are dying as a result of this industry: Human injuries and deaths are also common.

The most recent death of yet another trainer at SeaWorld did not have to happen, and this is not the first time a trainer has been seized, thrown against the walls of the tank, and held down to drown.

The intelligent, social ocean animals kept in the pitifully small tanks at SeaWorld are denied everything that is natural and important to them. In the wild, they swim up to 100 miles a day in the open ocean, but captured dolphins are confined to small tanks where the reverberations from their own sonar bounce off the walls, driving some of them insane. Some of these animals were violently captured from their homes, many are forced to learn circus-style tricks, and according to whistleblower tips from trainers, withholding food and isolating animals who refuse to perform are common training methods.

The only thing that people learn from visiting a SeaWorld theme park is how miserable life is for animals held there. Children see mere shadows of animals, defeated beings who are not behaving as they should and cannot do what nature intended for them. And these parks teach all the wrong lessons: that it is acceptable to imprison animals; to deprive them of freedom of movement and thought; to forbid them the chance to establish their natural territory and explore; to breed and separate them as we, not they, please; and to let them go insane from loneliness.”

Peta.org also has a form attached in this story, where you can write to the “Blackstone Group”, who owns SeaWorld, and protest your thoughts in a personalized letter that will be sent to ‘Hamilton James’ at the Blackstone Group.

Here is the brief letter that I wrote to the Blackstone Group:

It is cruel to hold these killer whales captive to make money! They are too big for these little bathtub-cages you put them in. They are tired of it! We the people are tired of it!
I’ve got power of the press and I am using it right now to make people aware of what Seaworld and other similar organizations are doing wrong.
Sea World needs to close it’s doors now and set the killer whales FREE!

Please help by going to this link at Peta.org and write your own letter to the Blackstone Group to help save the future of the killer whales!