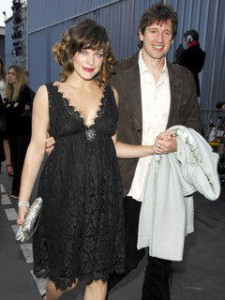 Actress and model Milla Jovovich got married today to Director Paul W.S. Anderson. The two had a very intimate wedding at their home in Beverly Hills, CA. They have been together for eight years, and have a daughter together named Ever Gabo, who turns 3 in November. Milla and Paul first met on the film “Resident Evil” that he directed, and she starred in.

You must see Milla in “Million Dollar Hotel”. I highly recommend it! It’s directed by Wim Wenders, and U2 scored the music along with Milla singing on some of the tracks.