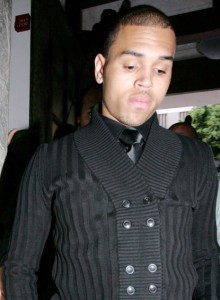 “Chris Brown is planning to give his first national TV interview discussing the night he assaulted Rihanna, has learned exclusively.”

“The singer will be formally sentenced on Wednesday, August 5 and sources told RadarOnline that he will most likely appear on Larry King Live after that.”

“Brown’s plea deal, negotiated by his lawyer Mark Geragos, will be turned into an official sentence of five years probation, 180 days of labor oriented service, and attending a domestic violence counseling class for one year.”

Larry King Live is the first choice of shows that Brown’s team picked for him to do. The team believes the Brown will be able to get his apology across without facing brutal questioning.

“Brown previously made a formal public apology that was posted on his website and said “I felt it was time you heard directly from me that I am sorry,” and that he wanted to live his life in a way that, “would make me truly worthy of the term role model.””