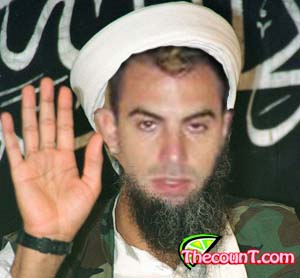 It’s not everyday I get a press release from someone claiming to be a “Terrorist Leader,” and it’s even rarer (by that I mean never) I get PR from a terrorist leader claiming to be pissed-off about being duped in a movie about a fake, super-flamboyant Austrian television host. There’s a first time for everything.

The list of folks looking to sue, Sasha Baron Cohen, for fooling them in his new movie, “Bruno,” is starting to grow, and now we can add “terrorist” to that list.

Ayman Abu Aita, who interviewed in “Bruno,” released a statement calling Cohen, “a big liar” who “made up stories.” Aita said he was “pursuing corrective remedies,” after learning he had been unwittingly cast in Cohen’s latest.

In the scene with Anita, Cohen’s Bruno, attempts to recruit a terrorist group to kidnap him in an effort to become famous. Aita fell for it, hook, line and sinker.

Let’s define “Ter·ror·ist”  ‘Somebody who uses violence or the threat of violence, especially bombing, kidnapping, and assassination, to intimidate, often for political purposes, who just got punk’d’