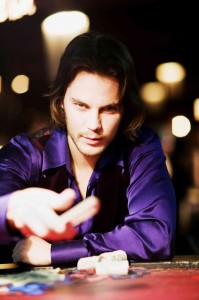 The Huffington Post reports that Taylor Kitsch and Lynn Collins will star in “John Carter of Mars,” the adaptation of the Edgar Rice Burroughs book series that Andrew Stanton is directing for Disney.

The role of Carter was considered one of the “gets” for a young actor, and Disney has spent months meeting and testing a wide array of talented actors from Jon Hamm to Josh Duhamel during its search. Canadian-born Kitsch, began building buzz with his starring role on NBC’s “Friday Night Lights” then he booked the role of Gambit in “Wolverine.”

You know usually perfection doesn’t turn me on, but this guy was the most visually stimulating part of “Wolverine” even if that Louisiana accent he wore was a little poor. He reminds me of a present day Matt from the television show “7th Heaven”. I’m so ashamed that I watched that show for a year and change but Matt Camden was one hot preacher boy and that family was so zany with their easily solved problems and their raucous family pets.