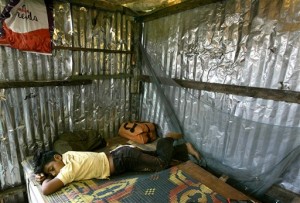 It’s only been a few weeks, and the Indian bulldozers are back to demolish more shanties!
If you didn’t hear, the child star Azharuddin Mohammed of the Oscar winning movie Slumdog Millionaire, got his shanty bulldozed a few weeks ago! There has been a worldwide outrage and protest. Why would a child actor from a million dollar, Oscar winning hit film, be living in a shanty! A shanty is basically a ’shack’. A ’shanty’ is a self built square or roof of basic shelter made of found materials. The kid got it bulldozed along with the rest of the shanty town.

This time when the bulldozers came around, they spared his shanty. But WHY is he still living in a shanty? This has not been resolved? The film didn’t cut him a check yet? This makes the producers look like the most evil trolls to ever live! There must be something we don’t know to this story. Something missing.

“Azhar’s father, Mohammed Ismail, said their home was spared because authorities knew about his son’s role in the Oscar-winning movie.
“Azhar has got an award. They respect that. I appreciate it. When they first demolished our house, they didn’t know,” Ismail said as he sat in the shack, recently tacked together from sheets of cheap metal, torn tarpaulins and blankets.”

[They are still promising him a home…]
“The state’s top official on Friday granted government apartments to both Azhar and Rubina, paid for with funds from the local chapter of the ruling Congress party. “Slumdog” filmmakers have also promised them homes. The families are now trying to figure out if they’ll be able to keep both.”

[Azhar told the AP his wishes about his living situation:]

“Azhar said he’d like two apartments”one for himself and one for his parents”but also wants all his neighbors to get houses too.”
[Sweet Azhar lastly said this statement:]
“Before giving me a home, they should give it to my friends,” he said.