I really  hope this is true and Guy put away his “single life is the best” mentality for now. Following up on Count’s story of Madonna’s adoption issue:

Madonna and her children left Malawi yesterday and touched down in Heathrow, where they were greeted by Guy Ritchie. David Banda carried his new toy guitar as dad lifted him up and carried him to the awaiting helicopter. On Friday after Madonna’s adoption request was denied, Guy issued a statement saying he “fully supported” Madonna’s attempts at adopting Mercy, was “saddened” at the rejection, and described her as a “fantastic and loving mother.” Despite heading back to the UK, Madonna filed an appeal soon after the ruling in Malawi, and it sounds like she has an ally in Guy if she needs it. 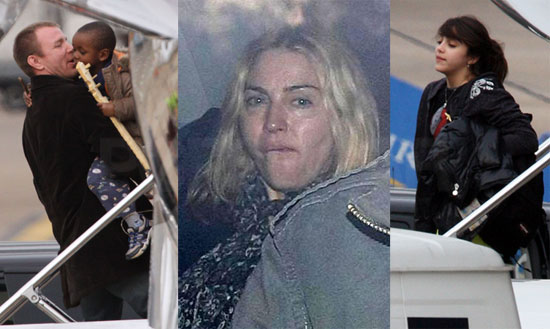