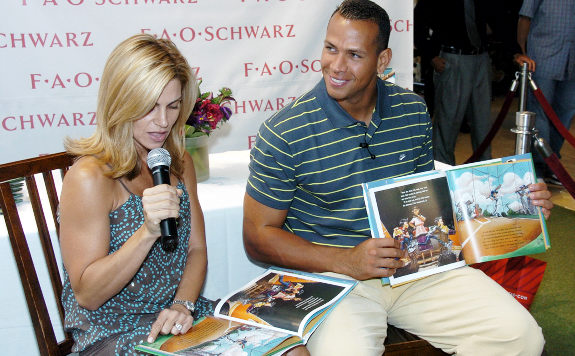 A-Rod made 25 million on his first huge baseball deal with the Rangers and then the Yankees picked up the contract. What the Yankees forgot to check up on was if A-Rod had a brain left.

Apparantly his brain was in the pants of HOOKERS. Read what Perez posted recently. Although Perez does not report who he got it from, it’s too good of a story to pass up.

Ex-madam Kristin Davis, who most famously found Governer Eliot Spitzerhookers to lay his peen into, has revealed that New York Yankees star sluggerAlex Rodriguez was a client of her escort agency!

A-Rod, who was married at the time, met Davis at a Philadelphia gym in 2006, where he reportedly tried to pick up the madam!

He asked Davis what her plans were for the night and the madam replied, “I’m having dinner with my boyfriend. But if you’re looking for someone to hang out with, here’s a number,” slipping the Yankee her business card.

A-Rod immediately booked a two-hour fucky-fucky session with one of Davis’ girls which led to Rodriguez’s long relationship with the escort agency. A-Rod reportedly boned the hookers over half-a-dozen times, meeting them at the Four Seasons hotel in NYC.

Surprise surprise, Rodriguez eventually grew bored with paying for sex and set his eyes on the Madam herself!

A-Roid sent Madam Davis a desperate e-mail after shagging one of her girls and the two relayed flirty messages back and forth:

Rodriguez: “Thanks for setting me up with Samantha. She was gorgeous. But she is not you. When can I see you you are gorgeous . . .”

Davis: “Hi Alex. You don’t want to see me. I’m no fun. lol. Just because your (sic) so sweet, here are some pics of me and I appreciate the compliments. Your (sic) a doll. Thanks, Kristin”

Rodriguez: “You have been playing hard to get for a year now, your (sic) killing me.”

Davis: “It’s not playing I am hard to get. Maybe you should try harder.”

Rodriguez: “Kristin, I definitely will and I love the pics. I put the one on my cell so I can look at you all the time. Alex.”

Davis: “You are too sweet. I’ll let you know when I get someone you like.”