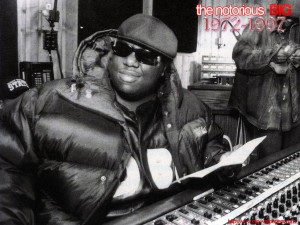 Today, March 9th, marks the 10th anniversary of the day that Notorious B.I.G. was shot and killed.

In 1997, B.I.G. was leaving a Vibe Magazine Soul Train Awards after party in Los Angeles California, when he was shot sitting passenger in a Chevrolet Suburban.

His legend still lives on strong today in many different forms of media such as movies, songs, clothing and various arts that are about B.I.G. himself.