Okay, so we have the latest National Enquirer with the hottest story about “Britney’s Stolen Diaries.” 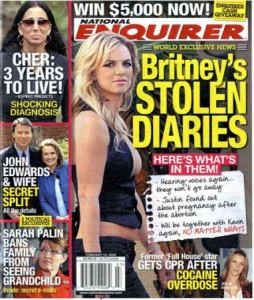 We are a little disappointed. They made this story out to be so huge. There are only really a few good n’ juicy tidbits. Credit goes to Jordan Miller over at Breatheheavy.com for compiling this story from the paper to the internets ya’ll. Here’s some of Britney’s diary juice:
Britney hears voices in her head – and answers them!
“Britney writes she has heard voices talking to her for years. She still hears them, and they tell her to run away and hide.”

The real reason Britney shaved her head:
“…She was out of her head at the time and was suffering from delusions. She believed that someone had planted an electronic bug in her hair and couldn’t think of a way to get rid of i except to have her head shaved!”

Justin Timberlake’s heartbreak over her pregnancy – and the guilt from her abortion:
“Justin was crushed when Britney told him she had an abortion. She said Justin was really hurt.

Britney never intended to divorce Kevin:
“She just wanted to show Kevin who was boss. She still loves Kevin, and she wants her boys to know that.

Lawsuit: What really happened the night Britney took her child hostage:
“She was threatening: ‘I’ll kill the kids!’ Out of her mind and wired on the drug methamphetamine, Britney refused to let her visiting sons Sean and Jayden return to Kevin.”

The singer bares her soul:
“Britney wants to have closure and start fresh. Britney’s gift to the boys is her truth.”

And then another whole page is dedicated to that ex-manager Sam Lutfi. It is about him threatening the Spears family to pretty much ‘pay up,’ or else he would do some sort of damage to their reputation. We have our own thoughts about that part of the story.
So buy the latest National Enquirer?
I think not. We do all that work for you : )