Whoa! Did you ever imagine Eddie Murphy as the next ‘Riddler’ in Batman??? Murphy has been signed up by British director, Christopher Nolan, who directed ‘The Dark Knight’. The last time the Riddler made an appearance in the Batman series, was in 1995, played by the hilarious Jim Carrey. 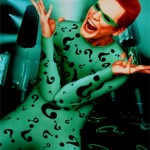 Looks like there are some other interesting picks for the next Batman movie:

Rachel Weisz is to “up for the role” to play ‘Catwoman’. She didn’t get the part yet! (Is she sexy?)

Christian Bale will continue to star as ‘Batman’. (Hot as always)

The film’s title is unknown, but they are calling it “Gotham” for now. The film is planning on having it’s release in 2010.