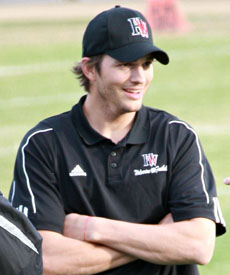 STAR Magazine is saying that Ashton Kutcher has been having a ball as assistant coach to North Hollywood’s Harvard-Westlake School freshman footballers. But the feeling isn’t mutual.

“The kids want him gone,” says an insider. “They think he doesn’t know what he’s talking about and can’t stand his tough-guy attitude.”

Out of the huddle, the kids mock their famous coach and have even given him a special nickname: Ashton Doucher!