Famous Photographer Bert Stern is in the news again for his shoot “The Last Sitting” he did with Marilyn Monroe just before her death. 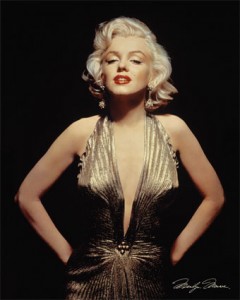 This time he is not trying to auction off Marilyn’s photos. Nor is he trying to sell the photos she DID NOT or EVER want the public to see.

He only just tried to sue three photographers for $1.7 million last year after they told him they had found seven film transparencies of the shoot.

Now, these guys are finally settling the dispute.

Associated Press reports that photographers Donald Penny and Michael Weiss said colleague Robert Bryan had found the film in curbside garbage in midtown Manhattan in the 1970s and kept it in a shoe box as memorabilia for the last 35 years.

(Yeah! Like you can just find a shoebox of Marilyn’s photos sitting by the trash!??)
Penny and Weiss are actually not asking for money for the Marilyn photos.

Their lawyer, Jamie Brickell, said Stern acknowledges in the settlement that his clients did nothing wrong. Brickell said Penny, Weiss and Bryan never asked Stern for any money; he said they only discussed returning the transparencies in exchange for a set of prints that they could keep.
AND THE VERDICT IS…

Brickell and Stern’s lawyer, Stephen Weingrad, said Stern, Penny and Weiss will develop nine sets of photos from the transparencies and sell them. He said the issue of how the proceeds are to be distributed is confidential.

So Bert is going to use Marilyn to pay rent again! Here we go again! Whoring out Marilyn is like a daily chore! Not into it.