LOS ANGELES, CA. (THECOUNT) — Girard Saenz, the man who made headlines in 2019 after he was arrested following police confiscation of over a thousand guns from a Bel-Air mansion, penned an “open letter” aimed at setting the record straight on the subsequent reporting of his alleged involvement in a 2017 Malibu weapons incident where he was also arrested.

Following the 2019 headlines, gossip website TMZ reported, Saenz, 57, held a team of house cleaners at gunpoint in 2017 after discovering them at a Malibu property owned by his longtime companion, Cynthia Beck. Saenz is now claiming that the “house cleaners,” were actually a gang of thieves pilfering millions of dollars of items from the pricey property.

TheCount.com agreed with Saenz to publish his “letter to the editor,” in full and unedited. TheCount.com has not independently verified the following claims.

Concerning your story, “Girard Saenz Involved In 2017 Malibu Incident ‘Held Cynthia Beck Housekeepers At Gunpoint’,” published on your website May 9, 2019, I write to inform you of inaccuracies in the article, albeit attributed to TMZ as your source. I am Girard Saenz and this letter addresses the Malibu incident portion of your article, as I am making no formal public statements concerning the Bel Air incident at this time, due to its ongoing status in the courts.

Your article states, “Law enforcement sources told TMZ, Saenz, 57, held at gunpoint a team of house cleaners back in 2017 after discovering them at a Malibu property owned by his longtime companion, Cynthia Beck . . . Saenz happened to be driving by the property when he noticed the team of people removing items from the house. Cops say that’s when he held them at gunpoint to investigate. Cops eventually intervened and took everyone back to the station to sort it out, according to TMZ.”

The inaccuracy is the allegation that I held “a team of house cleaners” at gunpoint. The “a team of house cleaners” were not house cleaners nor were they hired or known by Beck nor held at gunpoint by me; rather they are a group of convicted felons who were robbing the home and using a rented box truck along with private vehicles. Additionally, the article states that the cops “took everyone back to the station to sort it out.” This is also inaccurate. I was the only person to be handcuffed, arrested and taken back to the station. The Sheriff caused my vehicle to be towed off our property. It was blocking the robbers egress for the completion of their government assisted crime as they drove away with just under a million dollars of personal property.

After several hours of detention, I was released based on the fact that the Lieutenant on duty, after speaking with me, looked at the registration of the vehicle and the title of the home and understood that I had in fact been wrongfully arrested. I was released with no charges, my vehicle was returned to me and they retrieved my 12 year old dog from the pound, where they had sent him during the wrongful arrest. Anyone interested in the facts is welcome to look at the public record of the case filed in Los Angeles Superior Court, under case number 20STCP01714 concerning this subject. The defendants include the Los Angeles County Sheriff and TMZ’s “a team of house cleaners” in the First Amended Complaint, among others.

And of course, there is always the backstory that is never reported, unintentionally or otherwise. The property is the subject of ongoing land movement and cannot legally be made habitable until all the surrounding landslides have been correctly repaired from the original February 1997 slide. Once the outside factors have been alleviated, the house will be restored again.

The burglary however has nothing to do with the landslide. The burglary was nothing less than another attempt to force a sale of the 53 lineal feet of sand on the shores of Malibu’s Paradise Cove. There have been multiple aggressive attempts to purchase the home; when those attempts were unsuccessful, the burglars came in to send us a message.

The reason I can make this statement is that this is not a low security compound and is not easily accessible from Pacific Coast Highway. Prospective burglars must get through locked gates and past security cameras. Access requires two separate security codes to get through two separate gates. The second gate leads down to only two beachfront homes, ours being one of them that we ourselves have been locked out of on one memorable occasion.”

Beck is a real estate mogul who also owns the Holmby Hills mansion where authorities arrested Saenz back in 2019 and seized more than 1,000 firearms.

TMZ reported the incident this way:

Saenz happened to be driving by the property when he noticed the team of people removing items from the house. Cops say that’s when he held them at gunpoint to investigate. Cops eventually intervened and took everyone back to the station to sort it out, according to TMZ.

The Bel-Air mansion was described by authorities as a hoarder’s paradise with guns strewn throughout the house. Court records show the property is owned by Cynthia Beck, who has three daughters with J. Paul Getty’s son Gordon Getty. Beck bought the property in January 2001, but it remains unclear what, if any, connection she has to Wednesday’s events. Beck could not be reached for comment. 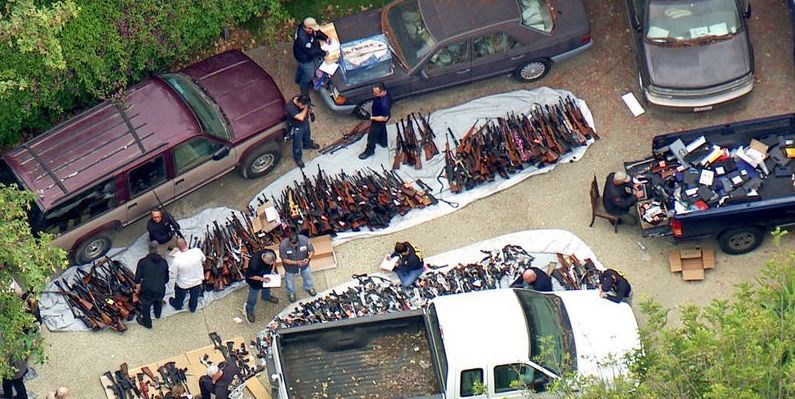 At the time, Saenz was arrested on suspicion of unlawful transportation and of giving, lending or selling an assault weapon. He was held in lieu of $50,000 bail, according to the Los Angeles Police Department and court records.