did Brooke Houts get to keep her dog

YOUTUBELAND. (THECOUNT) — Brooke Houts, a YouTuber and actress, has come under fire after raw video footage surfaced showing her apparently striking and spitting on her Doberman, Sphinx, a regular on her program.

Concern is growing on social media from some who demand the animal be taken away from the once popular youtuber. 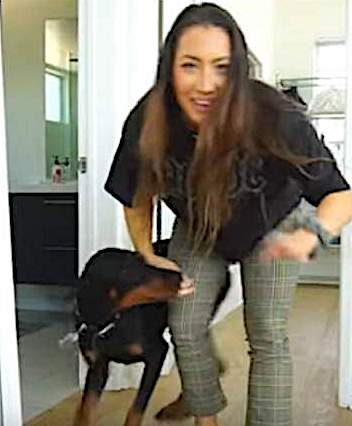 We now know that Houts is to remain in possession of Sphinx during the time it takes for the LAPD to conduct their investigation into the claims, reports indicated Friday.

Law enforcement sources told TMZ Friday that Houts has maintained custody of the dog — for now — because LAPD’s Animal Cruelty Task Force determined the pooch is not in immediate danger.

The controversy began when Houts accidentally uploaded a video of raw footage on August 6, which shows her smacking her dog, pinning him to the ground and shouting “NO!”

The video was quickly taken down and replaced with the more polished cut (which can be seen under fact #2), but many had already seen it by the time she took it down. You can still see the footage in the video under fact #1, reports Heavy.

Houts has since given a statement on the backlash and accidental video upload, in which she said in part:

“I want to clarify that I am NOT a dog abuser or animal abuser in any way, shape, or form.”