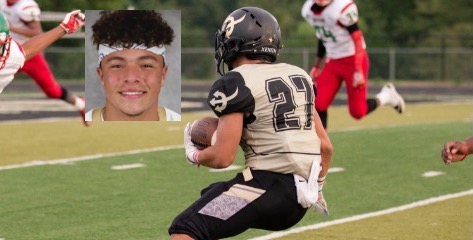 BEGGS, OK. (THECOUNT) — Kayson Toliver has been identified as the victim in a following a reported shooting at a home in Beggs, Oklahoma, on Thursday. Authorities say Toliver’s mother, Amy Hall, is accused in the shooting.

Toliver, 18, was one of three teens who were found suffering from gunshot wounds. Toliver’s two sisters, a junior and a freshman at the school, were named as the individuals wounded in the shooting. Toliver was pronounced dead at the scene.

On Thursday morning, investigators were called to a home in Beggs following a reported shooting. When deputies arrived at the scene, they found two teenagers suffering from gunshot wounds. They also discovered the body of 18-year-old Kayson Toliver. source

Toliver, #27, was a senior and a star running back at Beggs High School.

Hall has been arrested on one count of first-degree murder and two counts of shooting with intent to kill.