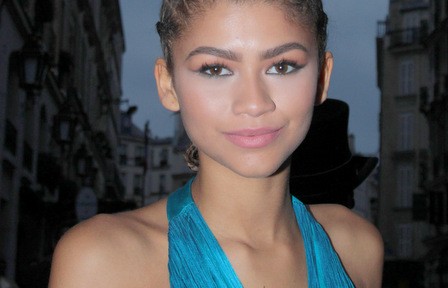 Actress and singer Zendaya Coleman certainly wasn’t happy to find out her photos for fashion magazine Modeliste were manipulated to slim her torso and thighs.

Zendaya took a stand against the photoshopped images and had the publication pull the issue until they restored the photos to the originals. After seeing the retouched images of herself posing in a cropped leather trench coat and black bottoms, the 19-year-old actress took to Instagram and posted a side-by-side image of the retouched and untouched photo from the shoot.

Zendaya stood her ground and explained she doesn’t like the unrealistic photos that make women feel bad about themselves.

Zendaya wrote on Instagram, “Had a new shoot come out today and was shocked when I found my 19 year old hips and torso quite manipulated. These are the things that make women self conscious, that create the unrealistic ideals of beauty that we have. Anyone who knows who I am knows I stand for honest and pure self love. So I took it upon myself to release the real pic (right side) and I love it.”

The editors of Modeliste, a print and digital fashion publication, decided to pull the photoshopped photos. The publication’s editor-in-chief Amy McCabe wrote a letter to Coleman thanking her for “raising a very important issue” and stated they were working to restore the original images before releasing the issue.

McCabe wrote, “In light of our not-yet-released November issue, with Modeliste’s Cover Girl, Zendaya and the swirling controversy in regards to any retouched images, I am compelled to publicly address this situation which was brought to my attention yesterday, personally by Zendaya”.

Amy continued, “Upon review of the final edited images which had been submitted to us by an independent editing company, together, as a collaboration between myself, Zendaya and her parents, we concluded that the images had been retouched to an extent that was not acceptable and not true to the values and ideals we represent and promote in our publication.

“I, therefore, made the executive decision to immediately pull the issue in order to have this rectified and have the images restored to their original, natural state which will reflect the true beauty and radiance of Zendaya.”

The editor-in-chief concluded, “It is our hope that these images and the truthful portrayal of these unedited images brings attention and awareness to this issue. It’s important that we learn to be uplifting not only to one another, but to ourselves. That we learn to embrace our differences, our unique gifts and those aspects and qualities that make us real and who we are.”

Zendaya later updated her Instagram post to thank the publication, writing, “Thank you @modelistemagazine for pulling down the images and fixing this retouch issue.”

That’s awesome that Zendaya demanded her photoshopped pictures be restored to the originals. She certainly doesn’t need any re-touching. She’s gorgeous!