“A Piece of Burger” Viral Video Star Wanted By Police

Lord have mercy! The trans, Courtney Barnes, who became an instant Internet viral star after delivering a funny commentary to local news reporters on a police involved accident, is herself wanted for shoplifting and has a warrant out for her arrest.

Ridgeland, MS., police say, Barnes is accused of stealing merchandise from Swell-O-Phonic store and has also racked up over $1600 worth of fines, mostly for traffic violations. 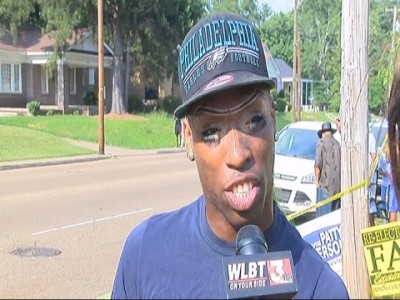 Ridgeland cops say that they would like for Barnes to come in and pay the fines as soon as possible.

Store employees say that Barnes stole a Van’s bucket hat a month ago, and is known in the area for frequent shoplifting.

On Monday, Barnes was on his way to get “a piece of… um, burger from Burger King” when he claims to have witnessed the crash involving a police officer.