A magnitude 4.9 earthquake has struck the southern region of Idaho around 10:am pacific time. 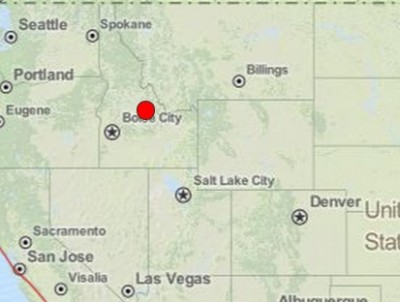 A moderate earthquake rattled a broad swath of Idaho early Saturday, damaging property and causing power outages near its epicenter in Challis, a city that has endured hundreds of slight to moderate temblors over the past 10 months, authorities said. The latest, measured at a magnitude of 4.9, was centered about four miles (6.5 km) from Challis in the state’s central mountains, but was felt as far away as Boise, a 190-mile (305-km) drive to the southwest, the U.S. Geological Survey said. The quake caused rockslides, damaged homes and knocked out power around Custer County, local officials said. Challis Mayor Mark Lupher said he was not in the area when the quake struck but that authorities have told him by telephone that there were no known injuries. Several people living close to the epicenter reported property damage such as cracks in the walls of their homes, he said. h/t yahoo