EMTs and ambulances were summoned to Williamson High School, in Mobile AL., after dozens of students reportedly fell ill after eating lunch consisting of fish nuggets.

Witnesses say the students got sick after eating lunch in the school cafeteria. 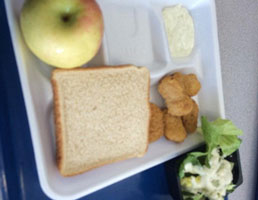 Several students reported throwing up and at least one was transported to the hospital by ambulance. h/t wkrg

ALSO READ: This is what the Obama girls eat for their school lunch

Some students refused medical attention and instead called their parents to come pick them up.