Reacting to news of the grand jury’s decision, the unruly crowd started a call and response chant, yelling “Justice for who?” – “Eric Garner!” 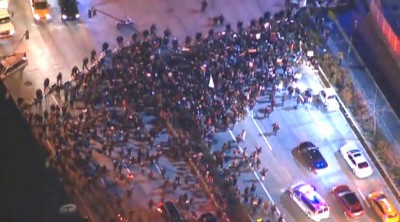 “They should react in an uproar. Just like they failed Ferguson, they failed us,” seethed Heather Ewig, 46, who called Garner a friend and “a teddy bear in the community,” as the crowd started to build. A police officer stands over activists, demanding justice for the death of Eric Garner, as they stage a ‘die-in’ during rush hour at Grand Central Terminal. “You gotta be kidding me!” shouted Linder Hampton, 59, who was wearing a T-shirt with Garner’s last words, “This ends today” and “I can’t breathe.” “It can’t be. They didn’t indict him? Where’s the justice at? All I can do is pray for the people of Staten Island,” she said outside Bay Beauty Supply at 202 Bay St. h/t nyp

Outside the Staten Island courthouse where the jurors met, furious residents blasted the ruling.