A 70-year-old man was ordered to change his shirt or leave an Orange County Fla., Planet Fitness over its anti-abortion theme.

Mike Amoroso wore a collection of anti-abortion shirts while working out at the popular gym and now they want his to stop or find another gym. 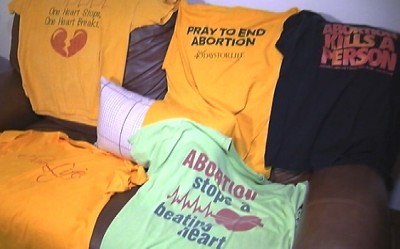 Someone complained about the controversial shirt at the Planet Fitness in Orange City and that’s when gym associates asked him to change or bail. “She told me, ‘I am very sorry. We have someone who is not happy with your shirt. Someone is offended by your shirt,'” said Amoroso. “I said, ‘You know I wear them all the time.’ She said, ‘You’ll have to leave,’ and I left.” h/t wftv

Amoroso believed the issue wasn’t what his shirt said, but how the message was delivered. So the following day, he wore a “softer” anti-abortion shirt, which was also too offensive.