EX Gov. Bob McDonnell And Wife Go Down On 11 Counts

Former Virginia Gov. Bob McDonnell and his wife, Maureen, have been convicted of 11 counts of corruption in federal court today.

The one-time Republican rock star and his lady were convicted of conspiracy, bribery and extortion. 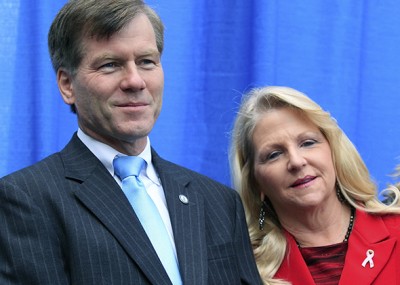 McDonnell covered his face with his hands and his head fell nearly to the defense table. His wife, convicted on nine counts, looked straight ahead. There were sobs from the seats behind the couple that included their five adult children. The 7-man, 5-woman jury returned its findings on its third day of deliberations in United States District Court for the Eastern District of Virginia. The McDonnells were acquitted of lesser charges of making false statements on loan applications. Ms. McDonnell was convicted on a charge she alone faced, of obstructing a grand jury investigation by trying to make a gift of $20,000 worth of designer dresses and shoes appear to have been a loan. source

The McDonnells were indicted on 14 counts of conspiracy, bribery, extortion and related charges stemming from what prosecutors said was a scheme to sell the office of governor, which Mr. McDonnell occupied through January this year, for $177,000 in gifts and cash from a dietary supplements executive.