Heavy Metal Wife: I Was FOREWARNED Of NYC 911 Attack

Gloria Cavalera, wife of Max, co-founder of Sepultura, wrote in her blog this week that she was informed by a mysterious caller and warned before the NYC attack on 9/11.

Gloria also claims she informed the FBI and police, who, to this day, could not be more disinterested.. 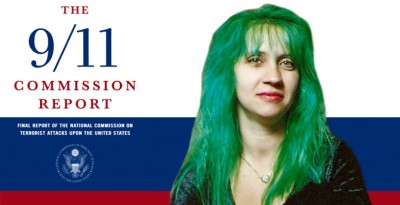 Good morning my Students, people of the tribe, people of the world… Did you know that a terrorist called me on the early morning of 9/11, two hours before the attack on the Word Trade Center? No, you didn’t. Did you know that your’s truly is in possession of a voicemail message from 9/11 that is equivalent to the Zapgruder tape of JFK’s assassination? No, you didn’t. Why? Because the FBI, the 9/11 Commission, The Washington Post, CNN, and everyone else in control of our information decided to bury it. I have carried this ever since that dreadful morning in 2001 and I will not suppress it anymore. People need the information…

I wake up early, before 6:00 am every day, but on September 11th of 2001, it was a morning I could never forget. I went into my office and I saw the light blinking on the caller ID- strange for a call to come in the middle of the night, but I could see that a couple did- a pizza place in New Jersey. Weird.

I went outside a grabbed the newspaper noticing Michaels Jordan’s face in the corner. It was an article about a press conference scheduled for that day. Going back in the house, the phone rang in the kitchen. It was my mother calling bright and early, “Turn on CNN Gloria.” I asked, “Why?” – “Turn it on honey.” Click. She hung up.

The shock filled me as I saw the tower in flames, the smoke billowing. Running through the house, I woke everybody up and went to the TV. Before our eyes a second plane struck the second tower.

A few hours later, I went to the office and checked my messages. A scary, creepy messaged slithered in my ear. WTF? This can’t be. The caller was slow, rehearsed, a message of unbelievable proportions. Although I didn’t realize it at the time, it told a three-part story of wicked betrayal of the American people’s trust. It told the past, the present and the future of our world. A prophecy with a chilling message is there, taking residence in my voicemail.

I went to a pay phone at the Safeway near my house and dialed the FBI hotline number that was on the CNN ticker at the bottom of the screen. A woman told me to preserve everything about the phone call and that somebody would come by to check it out.

I preserved. I waited. I waited. I called. I waited, I called, I called…And called…and called…Many things happened on my end as I tried to get this information to someone. I recorded the call and put it on a CD. I then did what any good manager would do; I asked our booking agent to book a tour for Soulfly to New York City and to New Jersey. This gave birth to the Static X/ Soufly US Tour in 2002.

My students, did I also mention that the call came in at 6:30 am EST, from 30 miles outside of Newark Airport? Did I mention that I uncovered a pay phone company that was related to the call? Did I tell you the message is one and a half minutes long and the caller called twice. Did I mention I took a Policeman with me as I visited each of the locations connected with the call? Did I tell you I met with the Terrorist Task Force in NYC? Did I also mention that the Policeman had called me a couple months later and told me that one of the places we visited was the apartment of one of the hijackers of flight 93? I still find it unbelievable, and I know that you must too. It’s not our usual class but I told you that I had a few surprises…

And what’s even worse??? Part three, the prediction and future visions mentioned in the call- many deaths for many years. A huge debt for America, someone talking with a crooked jaw (co nance), social security being cut… HOW DID THE CALLER KNOW? Why, simply put, he “listened” outside the apartment.

This is my life.

Chilling! But where’s the tape? Where’s the transcript? We want to hear it! Don’t you? Comment below!