Three of eight gay men who contracted bacterial meningitis this year have died, and all three had sex with other men, Los Angeles County health officials said Thursday. 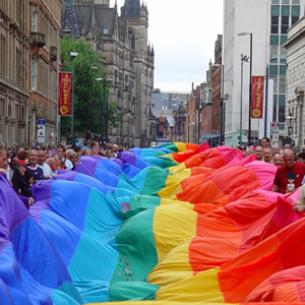 The confirmation came a day after the Department of Public Health urged gay men who had HIV or multiple partners to be vaccinated against invasive meningococcal disease.

The department said the three men who died didn’t have any direct contact with each other. The disease still is considered rare and sporadic and the department is shying away from declaring any outbreak in the gay community, authorities said. source

Four of the eight people who came down with the illness had sex with other men and three were HIV positive. The three who died in February and March were 27 or 28 years old and two were HIV positive, according to the department.

Of the other five people who fell ill, four are out of the hospital and one is hospitalized but recovering.

The agency was “insensitive” for failing to announce the deaths earlier, Michael Weinstein, executive director for the AIDS Healthcare Foundation, told the Los Angeles Daily News.

“We’re the largest HIV/AIDS medical care provider in the nation, and they didn’t tell us,” said Weinstein, a critic who has called the health department a “bloated bureaucracy.”

About a third of the 32 bacterial meningitis cases reported in the county since October 2012 involved men who had sex with men, the Daily News reported.

That population is most at risk right now, said Dr. Robert Bolan, medical director for the Los Angeles Gay and Lesbian Center.

However, the county health department is “paying attention” and acting “in a timely manner” by urging vaccinations for members of the gay community, he told the newspaper.

Invasive meningococcal disease is relatively uncommon and is less contagious than the flu.

However, it can be spread through close contact with saliva or mucus — such as sneezing, coughing, kissing or sharing drinks or cigarettes.

The disease can be treated with antibiotics if caught early but if the infection spreads it can lead to brain damage, hearing loss or death.

The health department is offering free vaccinations are being offered to those without health insurance.