TORI Spelling and Dean McDermott failed to lock-in a prenup, according to a report by RadarOnline. 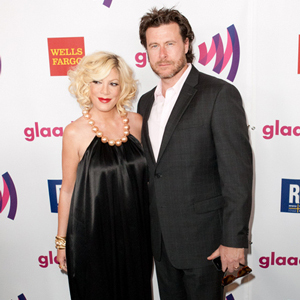 According to the new report, the 90210 star, who married McDermott in 2006, failed to protect her fortune. Tori’s “fortune” is only listed at $1.5 million, while McDermott is reported to be sitting on roughly the same amount.

Some claim that Tori is crying poverty while hiding her REAL fortune, which is valued as high as $300 million.

Tori is the daughter to TV’s late-great super-producer, Aaron Spelling.

In contrast, Candy Spelling, Tori’s mom and Aaron’s widow is said to be worth a staggering $600 million.

“Dean offered to sign one, but Tori refused,” a family insider told RadarOnline. “She truly believed Dean was her soul mate and there was zero need for a prenup.”

“Before marrying Charlie, Tori’s parents forced her to get a prenup and she was very thankful for it once the marriage went south,” said the source.

“With the recent allegations that Dean cheated on Tori, she’s now kicking herself for not securing the prenup with Dean. She doesn’t plan on divorcing Dean, but feels that a prenup might could have prevented him from cheating on her.”

Spelling married McDermott, 47, soon after his split from Canadian actress Mary Jo Eustace and her divorce from first husband Charlie Shanian was finalized — a man who she did have a prenup with – Thanks to her mom.